Zero Malaria Starts with Me

World Malaria Day, which takes place on 25 April each year, is an internationally recognized day, highlighting the global efforts to control malaria and celebrating the gains that have been made. Since 2000, the world has made historic progress against malaria, saving millions of lives. However, half the world still lives at risk from this preventable, treatable disease, which costs a child’s life every two minutes. Globally, 3.3 billion people in 106 countries are at risk of malaria. In 2012, malaria caused an estimated 627,000 deaths, mostly among African children

A handful of countries shoulder the biggest impact of the disease: approximately 70% of the world’s malaria burden is concentrated in 11 countries. Ten of these are on the African continent, plus India. In 2017, Africa was home to 92% of malaria cases and 93% of malaria deaths.

There are around more than 30 different malaria-carrying species of Anopheles mosquito, the main transmitter of the disease. Transmission is greatest in areas where the mosquitoes live longest and prefer to bite humans rather than other animals. The long lifespan of the African vector species and its preference for human blood is the main reason why approximately 90% of the world's malaria cases are in Africa.

Malaria is curable and preventable. A hundred years ago it was found worldwide: it was eliminated in most of Western Europe in the 1930s and in the US in 1951. More recently, Sri Lanka, Morocco and the United Arab Emirates are among countries that have eliminated it. Despite this, every year more than 200 million new cases of malaria are reported. Nearly half the world’s population is at risk of malaria: in 2017 there were 87 countries and areas with ongoing malaria transmission. Young children are the most vulnerable group affected by malaria - they accounted for 61% (266,000) of all malaria deaths worldwide in 2017.

There are significant gaps in the core measures used to reduce further transmission of the disease. Half of the at-risk population in Africa sleep under insecticide-treated nets, despite dawn to dusk being the most active time for insects carrying malaria. Just over one-fifth of eligible pregnant women in Africa received the recommended three or more doses of preventative therapy in 2017. And less than half of children with a fever in Africa were taken to a trained medical provider.

The complexity of the malaria parasite makes it difficult to develop any vaccine. Although a vaccine called RTS,S malaria vaccine recently developed in Africa which proved very efficient and effective by the WHO, this vaccine was firstly received by a Malawian child named Lusitiana, she would be the first child in the world to receive the RTS,S malaria vaccine through routine immunization. Despite steady progress made, this vaccine still remains in the developmental stage with review by the European Medicines Agency and the WHO for further implementation studies. In fact, over 20 other vaccine constructs are currently being evaluated in clinical trials or are in advanced preclinical development. Till date, a total of 275,000 children like Lustiana have received the first dose of the RTS,S malaria vaccine through a pilot implementation programme.

The theme of World Malaria Day 2020 is ‘Zero Malaria Starts with Me’ which is a movement dedicated to driving action and making change, and this starts with YOU! In light of the theme for 2020, TNCI has outlined plans to create awareness on the need for the Nigerian populace to be conscious of the adverse effect on malaria, the role every Nigerian play in completely ridding the nation of this deadly disease as well as initiate campaigns that will keep malaria at the tip of societal discussion. 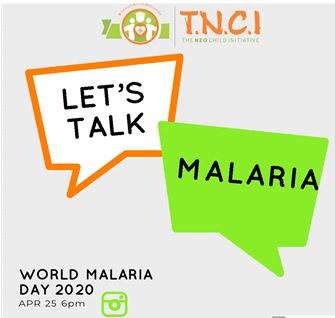